Our second day in Taos started out cloudy and cold, as we headed out on the road to Abiquiu. It had been my dream since high school to visit the landscape that had inspired the artist Georgia O’Keefe. Since it was low season, a tour of her home was out of the question, but my husband and I reasoned that a simple drive through Abiquiu would be satisfying in itself. On the way, we crossed the Rio Grande Gorge, where pedestrians can stroll along the walkway directly above a 650 foot drop straight down to the river.

I’m scared of heights, but this was an experience you just don’t say no to. We parked the car and made our approach. I had a bad feeling: in my belly, throughout my chest, a trembling in the very soles of my feet. I gripped the handrail and began to inch my way to the edge where the land fell away. I’d made only about five feet worth of progress when I began to whimper and could go no further. The rocky cliffs looked menacing and dangerous. A cold wind was blowing.  I visualized myself getting down on all fours and crawling along like a dog, instinctively wishing to clutch at the earth, laying low for sheer security. Meanwhile, my husband, Tim, strode forward wtih confidence, and took these photos.

We returned to the car. I felt defeated, the gorge was majestic and beautiful, but I was unable to push beyond the paralyzing fear that consumed me. I put it out of my head and focused on the ever changing, colorful landscape on the way to Abiquiu.

Hours later, our second pass at the Gorge was much like the first, but the difference was in the sun. It had miraculously emerged, warming the day, softening the landscape and giving me courage. This time I alternated my baby steps with deep breaths, determined to go as far as I could. Whenever a car passed, at 55 – 65 mph, I froze, waiting for the resultant vibrations of the bridge to dissipate before resuming my movements.

I allowed myself to go at a snail’s pace as other viewers walked past me. My husband called out encouragement over his shoulder, by this time he had gone to and fro a number of times, crossing from one side of the bridge to the other, snapping photographs. I fearfully barked at him when he tried to hold my hand, imagining that any miscellaneous touch could throw me off balance, grimacing as involuntary tears flowed. I felt so out of control and can’t recall if I have ever experienced such a physically paralyzing fear. About thirty feet along, I was rewarded by the silver sliver of the river, serpentine, cutting throught the dark earth, cliffs peppered with snowfall. I hadn’t made it anywhere close to the midpoint overlook, but I had gone as far as I could go and was happy.

As we made it safely back to the car, I thought of my more adventurous sister, Deborah, I wish she could have seen this, she would have loved it. I suddenly realized that it was eight weeks to the day since she had died. This was just the kind of experience she would dig.

In the car, Tim gave me a high five. You must be hungry. Yes, I thought, terror really gives you an appetite. When we sat down to order our meal at the bright and cozy Bent Street Cafe in Taos, the radio played Wild Horses by the Rolling Stones, the song I chose for my sister’s memorial service. Tim looked at me. Out of all the 3,000 or so songs they could have played, what are the odds they play this one? I swear it felt like Debbie was giving me a high five of her own.

Images of the gorge are by my brave husband, Tim Folzenlogen.

p.s. I recently read a moving post that calls to mind messages from lost loved ones, written by Kim Reynolds, called The Anniversary. You can read it here.

Writing about death, mental illness, spirituality, art and perfume. Because beauty feeds the soul, and love is beyond what we think.
View all posts by reneetamara »
« Previous post
Next post » 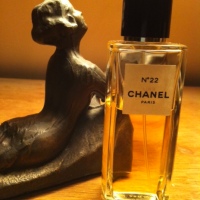 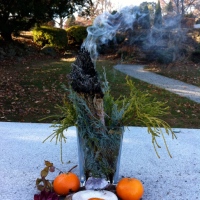